Eating (and drinking) our way through the Czech Republic

By Miranda of #NatandasKitchen (Miranda and Natalie) – a hashtag used to feature the culinary masterpieces of a chef-couples’ ever expanding cooking knowledge (view the hashtag on Instagram!)

Being the foodie that I am, I made sure to photograph all of the picturesque and not so edible looking foods of the Czech Republic during our week and a half long Eurotrip. Although the Czech Republic had some interesting and delightful delicacies, we were disappointed when we realized the locals barely eat vegetables (well, at this time of year)! Needless to say, we were excited to return home to our normal eating habits that didn’t include beef and/or pork with every meal!

On the night that we arrived to Prague, we ate at the restaurant that was right next to our hostel. The hostel and restaurant alike were called Fontana. The restaurant had a dark, cozy, log cabin in the winter atmosphere. We were pleasantly surprised to find that it was so inexpensive! We ordered a lamb chop dish and a steak dish. Dinner came with bread and “butter”, which was actually chicken fat lard. We each drank a Pilsner Urquell, which is the most famous beer of the country and a Staropramen, which is a less popular Czech beer. The bill came to about $30 (USD), which was crazy cheap!

This was a delicious pastry from a café.

Before our concentration camp tour at the Terezin ghetto, I ordered us “two double espressos” and received four cups of what tasted like regular brewed coffee. We also quickly devoured two bratwursts that were accompanied with rye bread, ketchup, mustard, and some salad on the side. We found it interesting that half of the sausages came with rye bread and half came with delicious crispy rolls. The rye bread didn’t quite seem like it went with the sausage. Maybe it’s just cheaper. 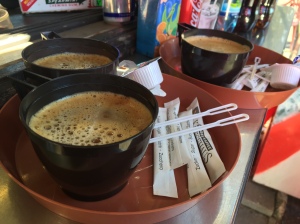 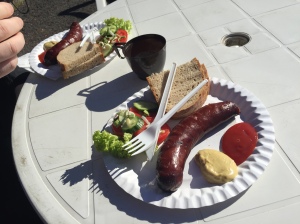 Coffee from a vending machine at a rest stop. It was sweet and I’m not sure if it actually had caffeine in it. I couldn’t read the words! 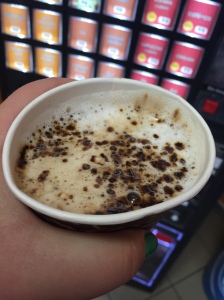 This was called a Doner Kebob, which was like a gyro. It was absolutely delicious. We were thrilled to be able to have it with chicken inside to break up the red meat. We ate it in Pilsen, Czech Republic on the walk to the brewery tour.

All of the markets had food displayed in this fashion. They also advertised prices such as “-39, for 100 grams” (about 1-2 USD) but you had to order at least 400 grams. At first we thought the prices were very cheap but realized that we were converting wrong. Whoops. Gnocchi, sauerkraut, and sausage dish and a paprika sausage. 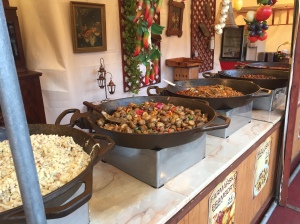 For dinner we ate at this fantastic Italian restaurant called Rango. It was actually a hotel next to the hotel we ended up staying at. We ate bruschetta, grilled chicken with zucchini, tuna carpaccio, homemade pasta in a mushroom sauce, and chocolate fondue with fruit. The tuna carpaccio and pasta with mushroom sauce were the dishes that stood out the most and I am craving them as I write this. The ambiance of this restaurant was eloquent and modern. We enjoyed eating there. 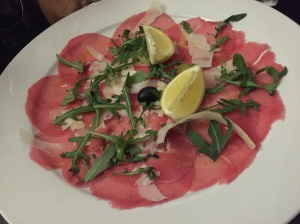 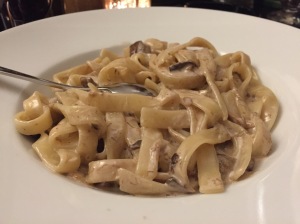 The following morning, we ate the breakfast buffet at our hotel U Salzmanu. There were a variety of options: a few meats, cheeses, cereal, rolls, bacon, eggs, and coffee. It was tasty.

We noticed that the pubs had these hard round pretzel/breadstick things that you munch on while drinking. We didn’t actually taste them. 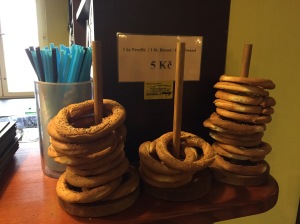 This was a popular street dessert. It is bread with confectioners’ sugar roasted over coals. It didn’t have much flavor and not something we would eat again.

Potatoes and bacon from a market.

Spinach, gnocchi, and sour kraut from a market.

Another paprika bratwurst from a market.

Coffee from our hotel in Prague. 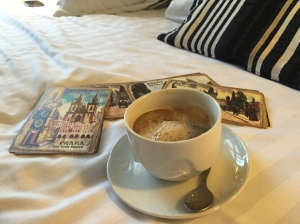 “Fried cheese” is a common Czech food for the tourists to try. It was literally like a round mozzarella stick. It wasn’t special at all.

We ate dinner at a local bar. We got Olomouc fried cheese, which was a stinky cheese. I wished it would have come without the breading because I appreciate pungent cheese in its’ most natural form! We attempted to get a salad and it came with half pasta, half lettuce, and brie cheese, saturated in Caesar dressing. We also got lamb, dumplings, and spinach.

We were dying for veggies! So we ordered them for breakfast!

Goulash from a market. Mediocre.

Pizza! Pretty good. The crust was very thin and it didn’t have much cheese on it.

These are two Czech cheeses from the convenient store. The one on the left was stringy and looked like thick spaghetti noodles. It was extremely salty. The other one was less salty and actually edible. Both resembled mozzarella cheese. 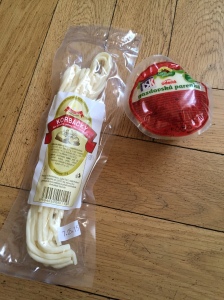 We went on a brewery tour and learned that there are three ways that you can order a half liter of beer: hladinka, snyt, and mliko. Mliko style is so that the beer stays fresh until you drink a sip at the end of your meal. 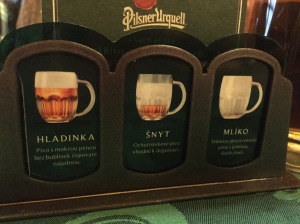 We ordered this salad and soup on the brewery tour. It wasn’t anything special.

For our second dinner, we took out local Asian fusion from a place near our hotel. We ordered a rice noodle dish, coconut soup, and a vegetable curry. All of the dishes were so light compared to American Asian food. They weren’t drenched in oil. We wish the food would always taste like that!

Breakfast buffet for about 10 USD at our Hotel Eurostar David in Prague. There was such a medley of foods ranging from an assortment of meats and cheeses, to a whole bakery of pastries and breads, to hot and cold cereals, fruits, veggies, juices, coffee, and hot trays of eggs prepared numerous ways. They didn’t miss anything for sure.

During our Castle Tour, we stopped at a café and got coffee and shared an oatmeal cookie. 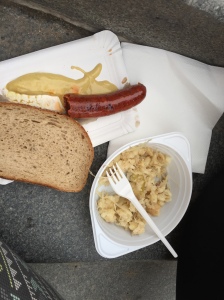 This was a special half liter of beer only served at the restaurant Lokal. It had Pilsner Urquell on the bottom and Kozel on top. The two didn’t mix. 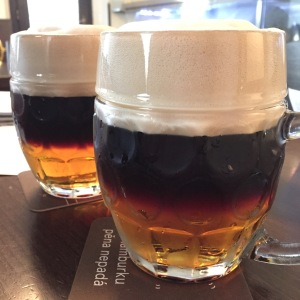 This was a beautiful looking bakery.

We got a raspberry and chocolate macaroon from there. 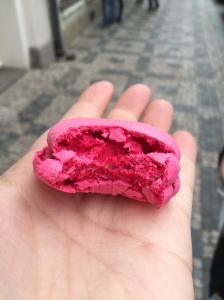 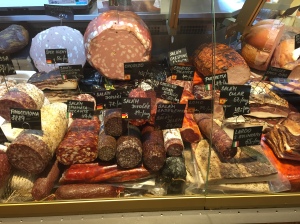 We got these two interesting looking combinations at a café in the library. One open faced sandwich had potato salad and turkey on it and the other had mayo and salami. Both had pickles and tomatoes on top. Our tour guide said that they serve these to their guests at house parties. They were very cheap (about 25 cents USD each)! 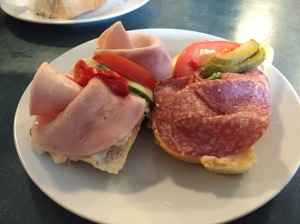 As you can see, they’re all about that meat. 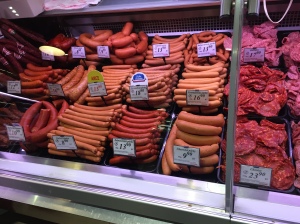 (We paid for a cooking class on my birthday. The following are pictures from her house.)

Becherovka herb liquor which tasted like a mixture of jager and fireball.

Sausages from our cooking class.

Cafe for my birthday dessert. Lattes with pretty art. 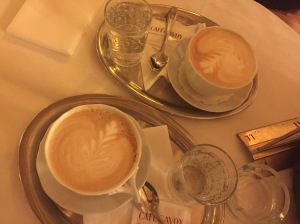 A second taste of our hotel breakfast.

Strawberry banana swirl cream ice on a cone at the Praha Zoo.

Burrito meal and rotisserie chicken over spaghetti (I ordered this weird combo) at the zoo cafeteria. We were happy that this didn’t cost a million dollars like at American tourist traps. We were happy to have American food at this point. 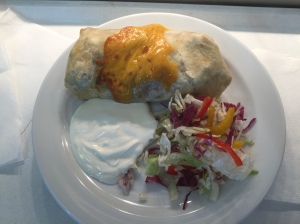 At Starbucks, the venti cup is a half liter and not 20 oz. They also don’t water down their iced teas!

We had to use up our Czech Krouna so we wouldn’t lose money in the exchange so of course, we decided to eat. We got a shrimp salad and a personal pan pizza at the Old Town Square. We ate overlooking the Astronomical Clock. The food was way overpriced for this country but still not that bad compared to the US. It tasted good too!

Overall, the Czech Republic had some decent food (for people who aren’t on diets or vegan)! We would definitely go back to this beautiful country with so much interesting history.