In the midst of dozens of beach bum bars and touristy shops along Fort Lauderdale Beach lies a South American culinary gem. Peruvian-Chinese chef Danny Kou opened KOUSINE Peruvian Kitchen four months ago after practicing his talents in San Francisco, and the restaurant has earned rave reviews since then for its flavorful fusion dishes. The South Florida Sage recently got a chance to taste some of their most popular offerings.

When you first walk inside KOUSINE Peruvian Kitchen, it might seem like an average takeout joint. Since there is limited seating, it’s best to sit outside, where you’ll catch a breathtaking view of the beach.

I had never eaten Peruvian food until this day, so I didn’t know what to expect, aside from the fact that it is seafood-centered.

Our meal began with a light starter of prawn chips with cancha (toasted corn), a popular Peruvian snack.

Next up was the Tiradito Bicolor, which has, as its title suggests, yellow and orange pepper sauces side by side. Scattered with the tiniest Peruvian scallops and choclo (large Peruvian corn, like hominy), this was a light and delicate dish of which I could not get enough. 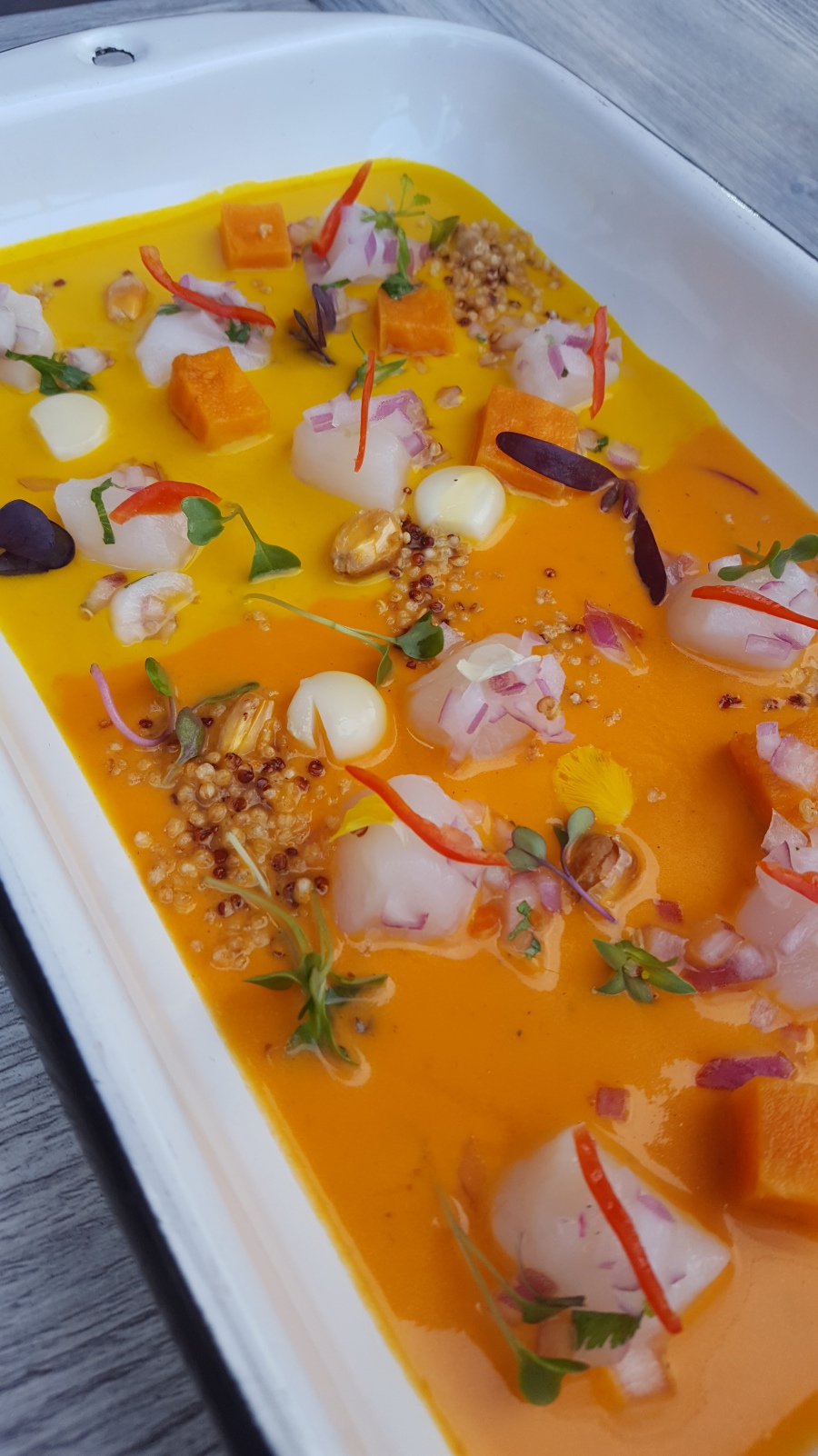 If you have ever eaten cebiche (raw fish brined in a citrus juice and spiced with peppers) before, you probably haven’t had it quite like this. The La Copa is a goblet full of fried calamari and the catch of the day with the tangiest lime juice that we could not stop eating. It came with a side of a divine yellow pepper sauce and cancha, or toasted corn. Since ceviche is considered Peru’s national dish, it was satisfying to see that the chef did not mess around with this version.

Following this was La Causa, which had a tie with La Copa for my favorite course. It had creamy tuna tartare and avocado sandwiched between two aji amarillo potatoes, topped with panko breaded shrimp.

The Plancha Marina came with plenty of fresh octopus and calamari, along with a delicious chimichurri sauce, and the Chaufa Aeropuerto was a wonderful play on fried rice, complete with an open face omelet on top.

Looking for a good group dish? Try the Kam Lu Wantan, with fried wonton chips and BBQ pork, beef and chicken. The sauce is light and the entree is optimal for sharing.

Chef Kou certainly knows how to craft a dessert. Choco Passion, with chocolate and passion fruit mousse, beautifully melded together two flavors that I didn’t ever think could be paired. The Manjar de Quinoa’s quinoa pop gave the dessert a welcome crunch, along with mango compote, coconut and qunioa con leche (a sort of Peruvian rice pudding). Neither of these were too sweet, and they cleansed my palate after a hearty yet incredibly light meal.

KOUSINE offers some fine food from south of the equator to the Venice of America, and it certainly has the quality seafood to prove it. If you have never tried Peruvian cuisine, KOUSINE is a wonderful place to start.

Olivia Feldman is a contributor for The South Florida Sage. Her favorite foods are anything that involves pasta and her mom’s cooking. When she’s not eating and drinking her way through South Florida, you can find her going to concerts, planning her next travel destination, and hosting her biweekly music show, “Back in Our Minds,” on Jolt Radio. You also can find her on Instagram and Twitter at @oliviafelds

Disclosure: I received a complimentary tasting at KOUSINE All opinions are my own. All images appearing in this post photographed by Olivia Feldman.